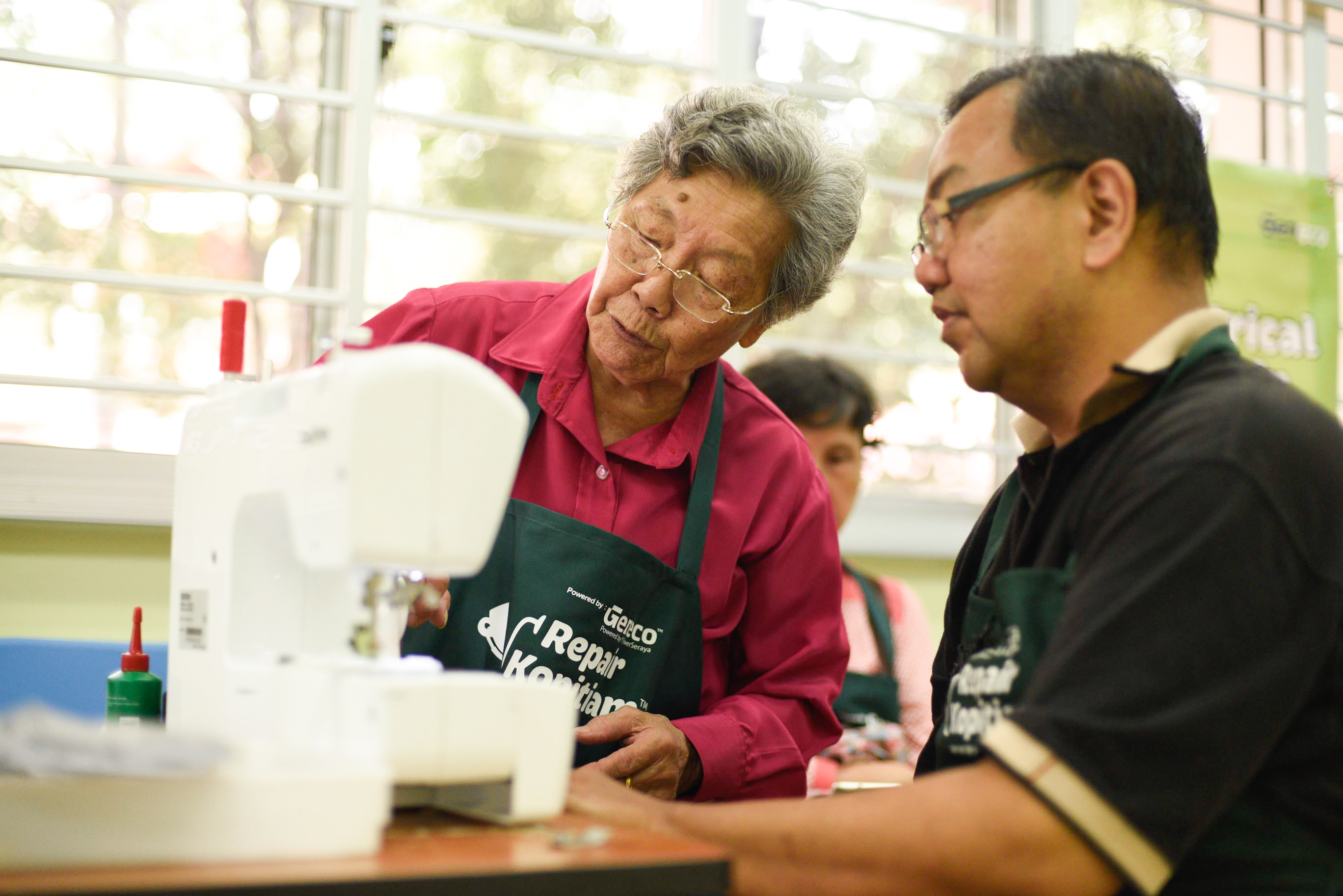 Geneco believes in giving back to the community. As the effects of climate change are being more keenly felt, with rising sea levels and temperatures, the need for greater sustainability has never been more apparent.

Everybody has a part to play, and being mindful of our actions, and the impact they have, is an important first step in working towards a sustainable future. To spread this message across, we work with many amazing individuals and organisations who aim to bring about real change in the world in a variety of ways - our ChangeMakers.

Last month, we worked with two of them - Food Bank and Repair Kopitiam - to spread this message of sustainability and encourage Singaporeans to do their part to meet the nation’s goal of Zero Waste. 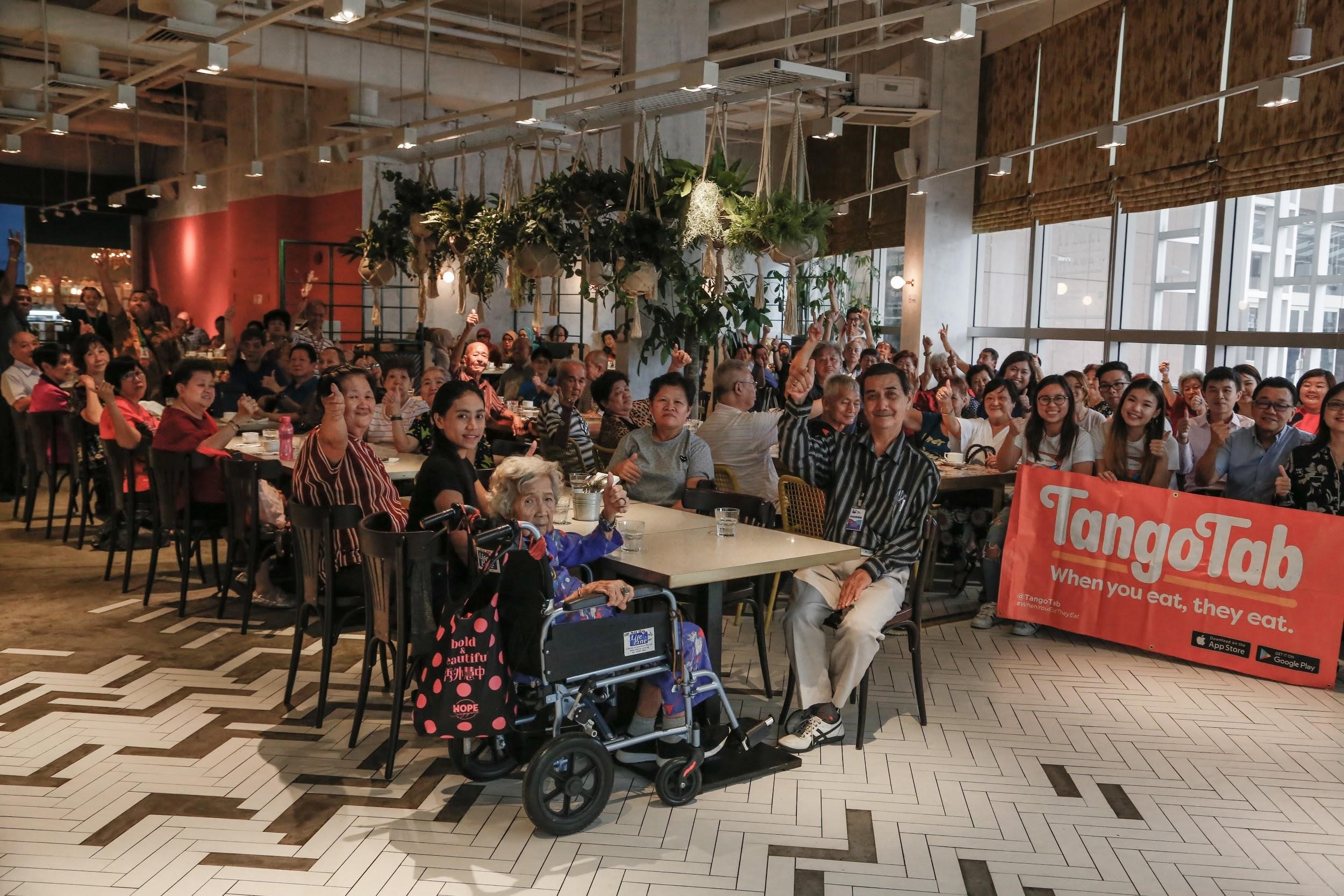 On 12 September, Geneco had the opportunity to engage with the community at the second installment of “Feed the City”. Held at Plentyfull, we partnered Food Bank to raise awareness about food waste issues in Singapore and eradicate food insecurity - one meal at a time.

Food waste is a critical issue for Singapore. In fact, the amount of food waste generated in Singapore has increased by 30 per cent over the past 10 years and amounted to 636,900 tonnes in 2018. Unfortunately, this amount is expected to increase in the coming years, thanks to Singapore’s burgeoning economic and demographic growth. 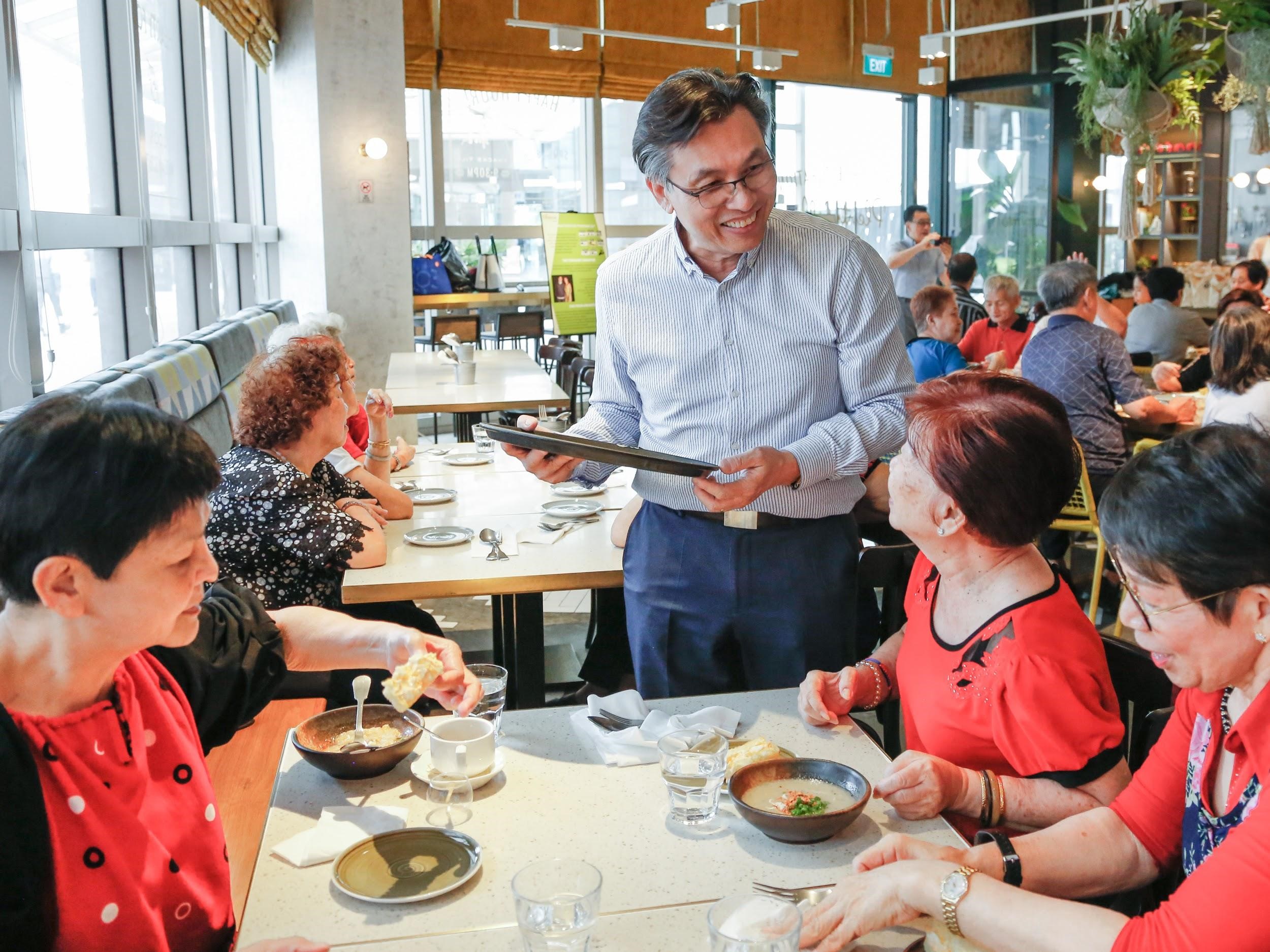 Putting a smile on everyone’s face as Executive Vice President of Geneco, Mr Low Boon Tong, serves the dishes to the beneficiaries

To overcome this challenge, Food Bank works with partners to collect surplus food in the market and redistribute them to organisations and people in need of food. You wouldn’t guess that to be the case, though. At the event, beneficiaries were treated to plum salted tomato to awaken the taste buds, which was then followed up by warm Indonesian chicken porridge with a side of braised eggplant in rich tomato sauce. To top it all off, a light orange flavoured chiffon cake was served as dessert.

An open stage set the joyous mood among the elderly. As they put on their dancing shoes to dance to the beat and belted to their favourite tunes from yesteryears, they were transported on a time machine to relive their youth. 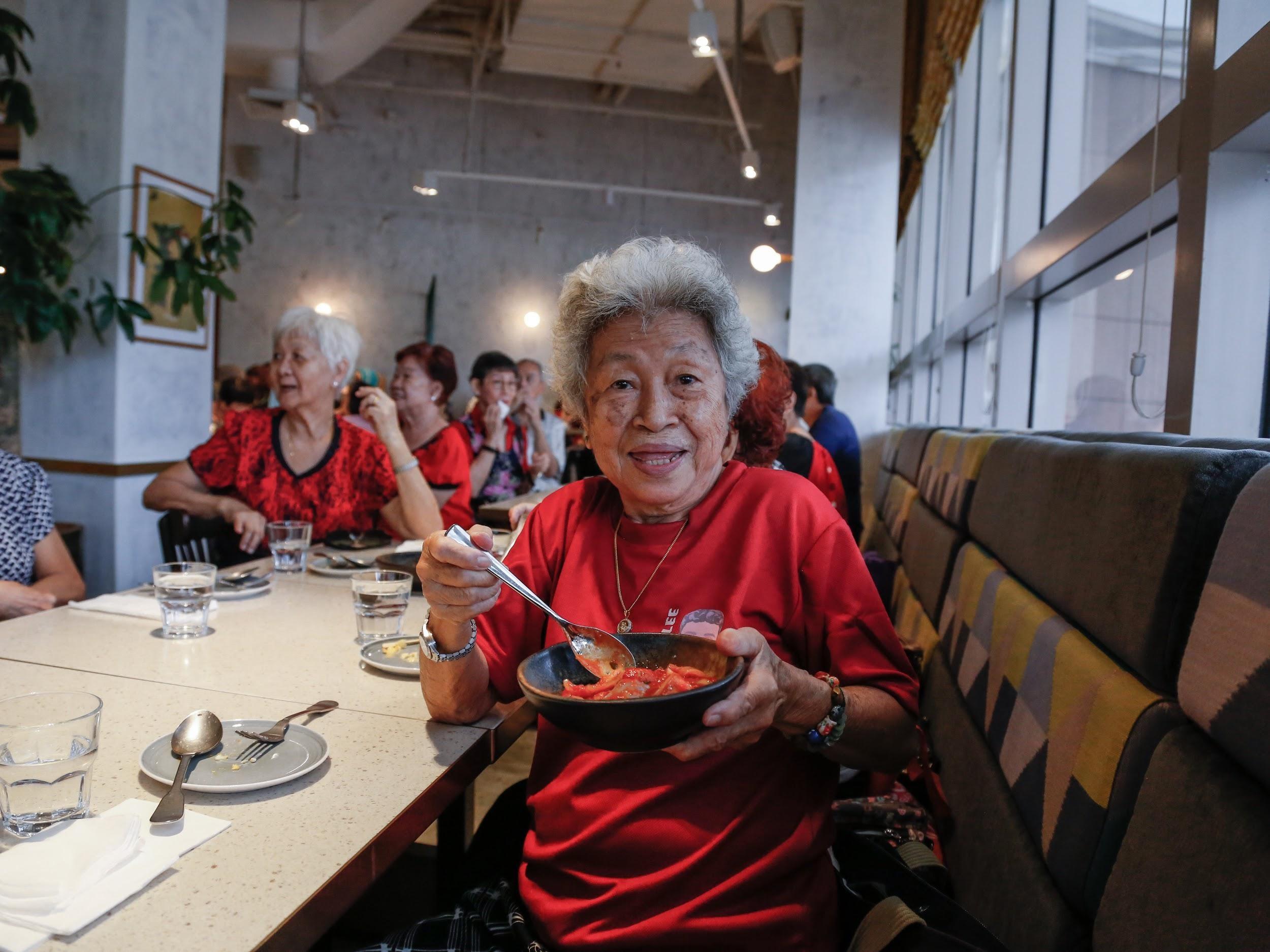 Auntie Lee, one of the beneficiaries from the event, enjoying the scrumptious spread served by Geneco’s volunteers

The event was a success with close to a hundred beneficiaries participating in this “Feed the City” event. It was an afternoon of fun and laughter as volunteers from Geneco engaged with the elderly with an afternoon of games alongside the scrumptious spread at Plentyfull.

The official launch was graced by Dr. Amy Khor, Senior Minister of State for the Ministry of the Environment and Water Resources. Together with Mr. Veerappan Swaminathan, founder of Repair Kopitiam and Mr. John Ng, our CEO, Senior Minister Dr. Amy Khor presented the aprons to the inaugural batch of Repair Coaches from the area. 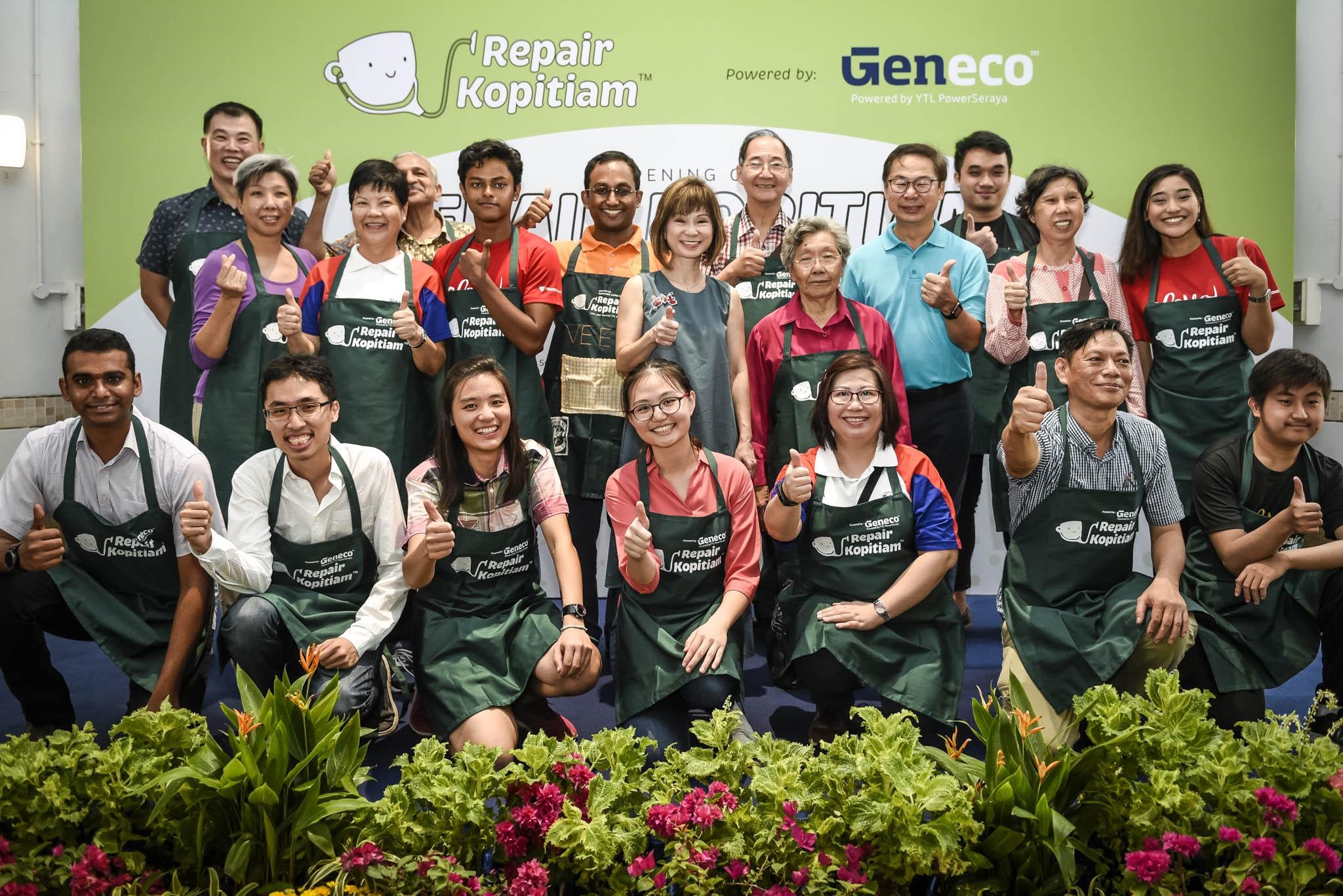 Dr. Amy Khor, Senior Minister of State for the Ministry of the Environment and Water Resources, presented the new aprons to the inaugural batch of graduating repair coaches from Repair Kopitiam

With Singapore’s economic prosperity over the years, the culture of convenience has been steadily taking over. It’s never been easier to succumb to the buy-and-throw-away culture, given the ease and choice of alternatives we have. Whether is it a faulty rice cooker or a piece of clothing that needs some simple mending, rarely is our first thought to fix it - we instead often take the chance to replace it with the newest and shiniest model. 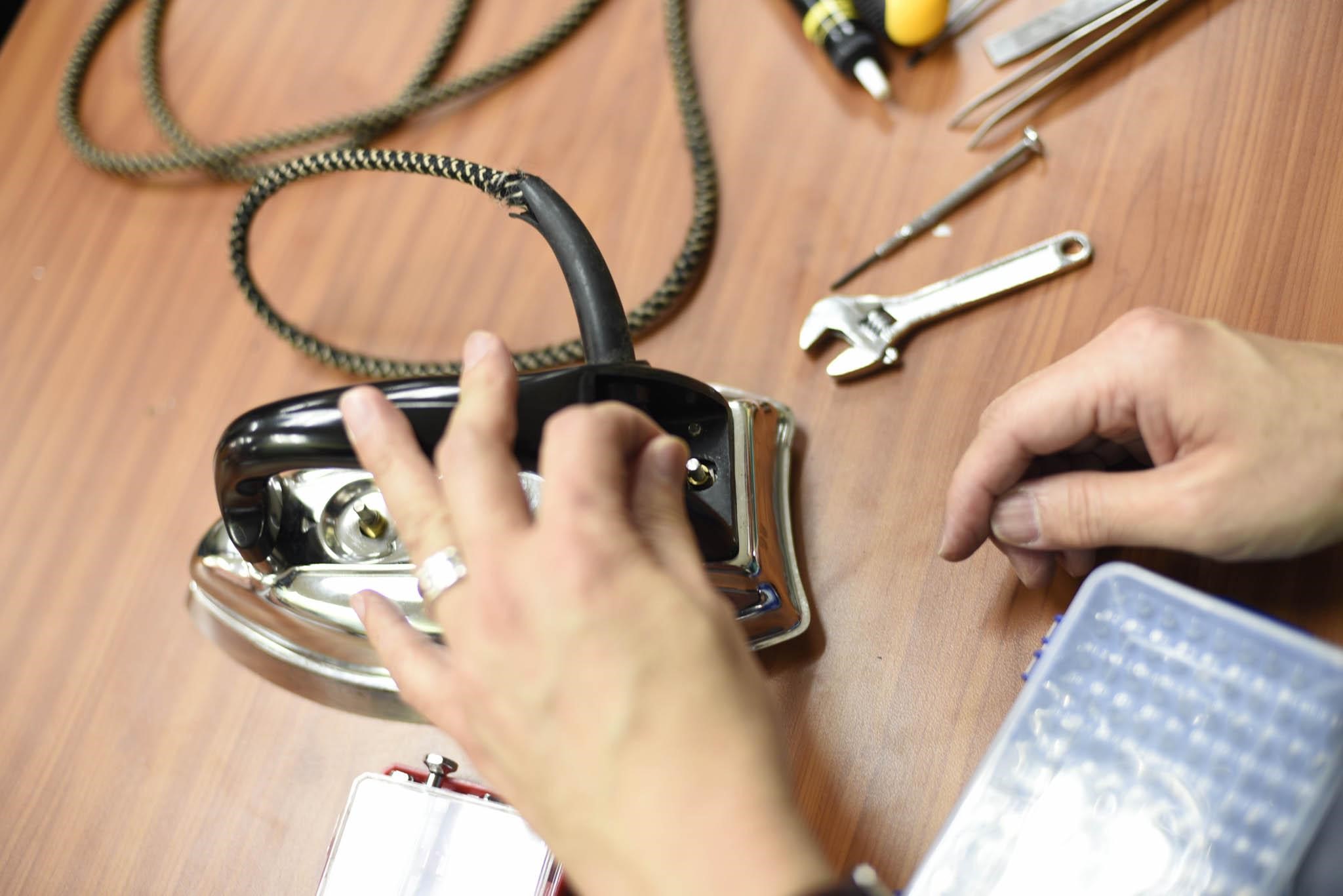 Fix it, don’t bin it. Give your household appliances a new lease of life by opting to fix it to extend its mileage

Residents were welcomed to the community-centric event for free consultation and guidance from Volunteer Repair Coaches on how best to repair their faulty electronics to give it a new lease of life. As each resident brought in their faulty items for repair coaches, these volunteer coaches (who each went through a 10-week intensive course) patiently guided and taught the public how to fix these everyday items--ranging from irons, to luggage. Additionally, public workshops were made available for residents to pick up on some simple technical skills to help them in their repair works. 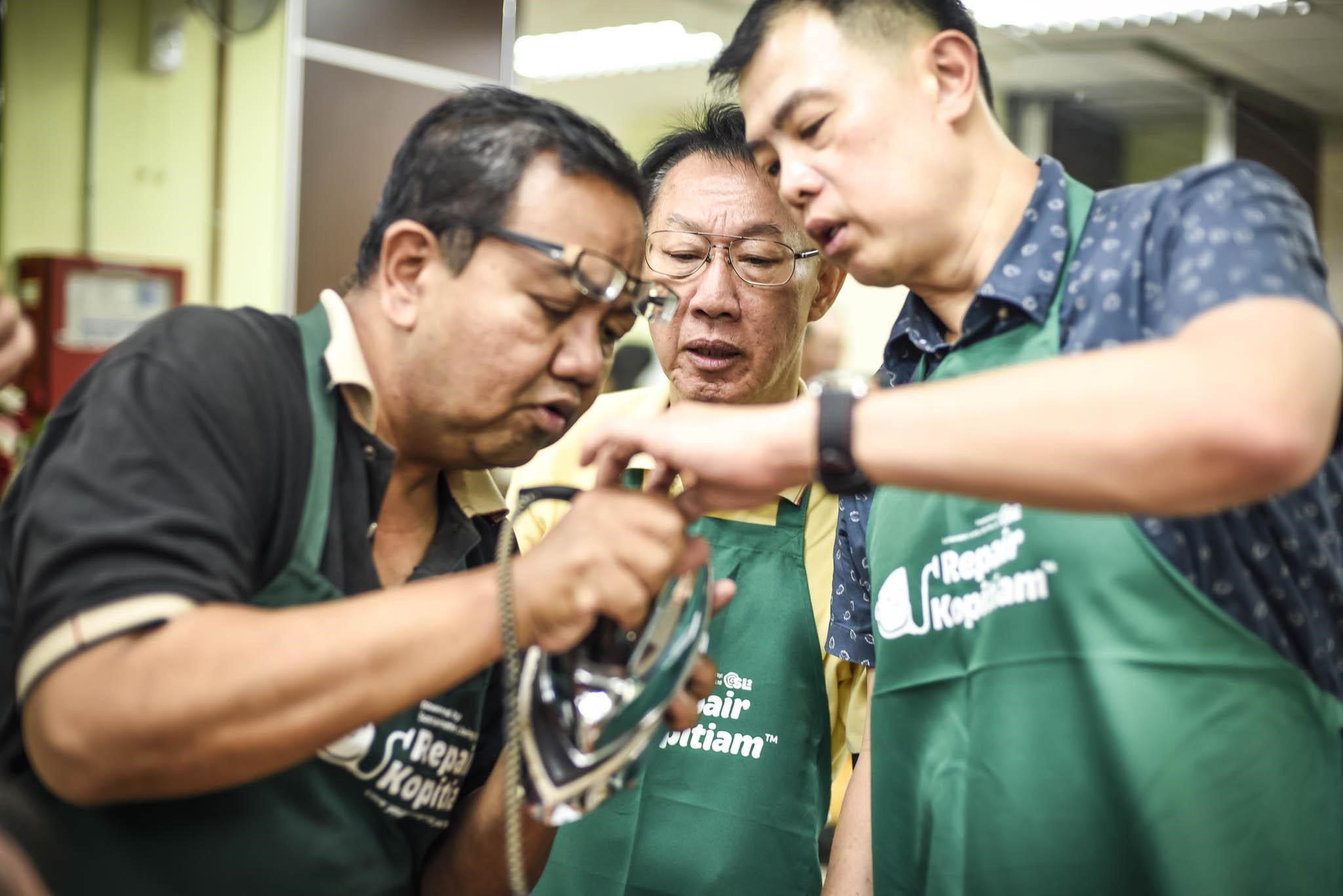 Residents from the heartlands are welcome to bring your household appliances that need repairing to Repair Kopitiam’s Repair Sessions every last Sunday of the month. Let us revive the repair culture and rediscover the value in our everyday things.

Inspired to make a difference? You can volunteer with the Food Bank  to raise awareness on food waste and insecurity or become a repair coach with Repair Kopitiam.

Additionally, small everyday decisions can make a difference as well, for example -

You can make a difference too! Start by reducing your carbon footprint when you sign up for Geneco's Get It Green plan.