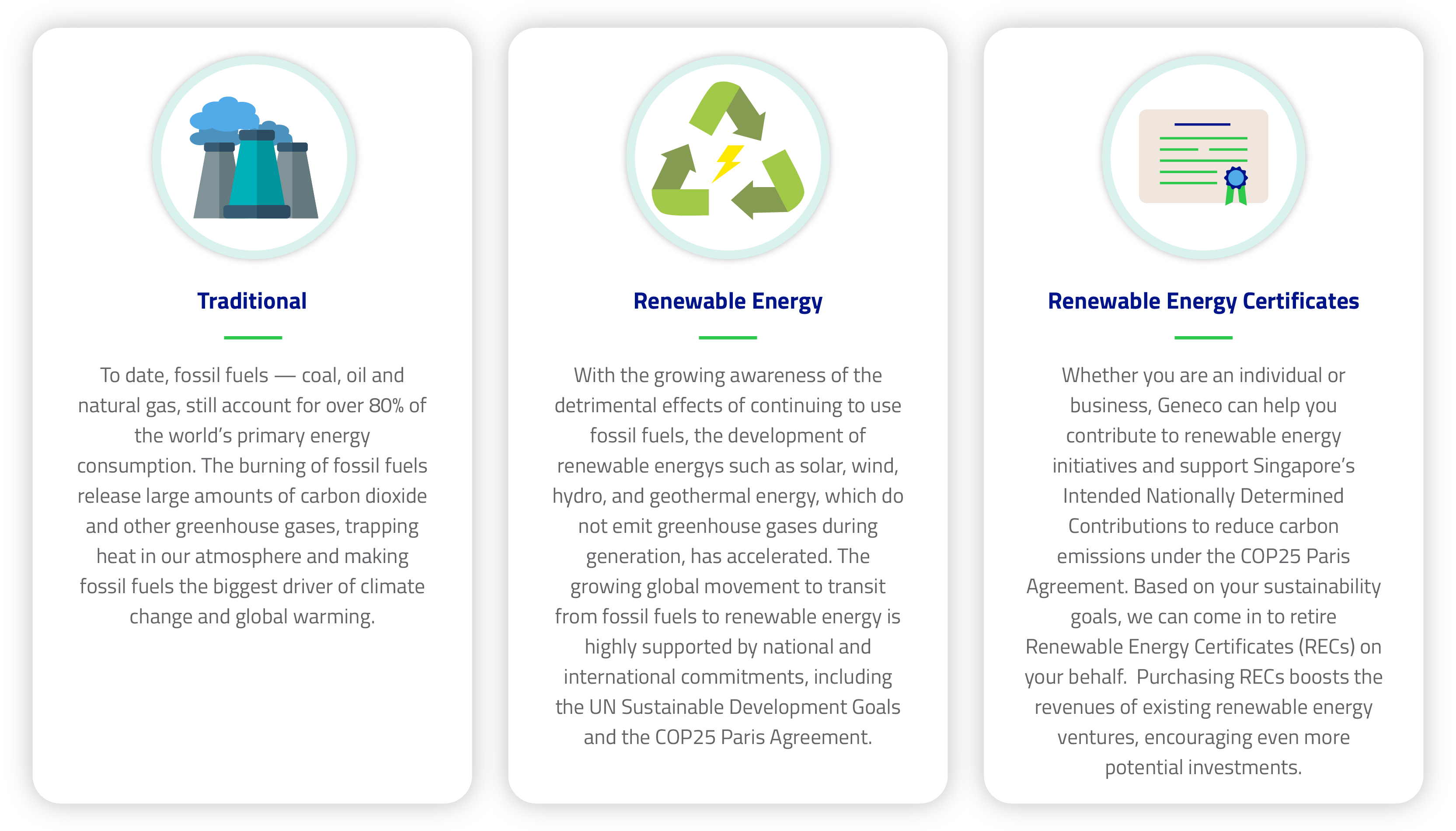 What is Renewable Energy?

Renewable Energy might be a term you have come across if you have been on the lookout on getting your own green electricity plans for your home. What exactly is it, and how does it help the environment? Let us break it down on what it means, to help you better understand and assess it.

Currently, fossil fuels — coal, oil and natural gas, still account for over 80% of the world’s primary energy consumption. The burning of fossil fuels releases large amounts of carbon dioxide and other greenhouse gases, trapping heat in our atmosphere and making fossil fuels the biggest driver of climate change and global warming.

Renewable Energy, on the other hand, do not emit greenhouse gases during generation. It is produced from natural resources that are constantly replaced and never run out, such as solar, wind, hydro, and geothermal energy.

What are Renewable Energy Certificates (RECs) and how do they work

Renewable Energy Certificates, known as RECs, are market-based instruments that endorse units of electricity generated by renewable energy sources. Each REC represents the clean energy attributes of one megawatt-hour (MWh) of renewable electricity. For instance, if a solar power facility generates 1 MWh of electricity which flows into a power grid, 1 REC would be credited to them which they can choose to keep or sell it.

Because electricity enters our main power grid from many different sources ranging from solar to natural gas, there is no way to know exactly what energy source your electricity comes from. As such, RECs are put in place to serve as an accounting, tracking and assigning ownership mechanism for green energies as they flow into the power grid.

RECs are also internationally recognised for meeting renewable energy commitments and within frameworks such as RE100, Climate Disclosure Project (CDP), LEED, Greenhouse Gas Protocol. Renewable energy generation facilities are only eligible to receive RECs for each unit of electricity generated if they comply and are registered under internationally recognised standards, such as the I-REC standard.

After purchasing RECs, you can rightfully claim that 1 MWh of your electricity use came from a renewable source upon its ‘retirement’. An REC can no longer be sold again once it is retired, meaning no one else can claim that unit of renewable generation.

Individuals and organisations working towards their respective sustainability goals have various options when it comes to choosing how to lower their carbon footprints. These include activities that reduce emissions, energy efficiency measurements or switching to clean energy solutions. Recognising the difference between options such as RECs and Carbon Credits can help identify the best methods in achieving the respective goals while charting towards a greener future.

While both RECs and Carbon Credits help to lower the carbon footprints, they are different tools used for different purposes in achieving this greener goal. The key difference between the tools, is the purpose and mechanics behind it.

Carbon Credits helps to offset greenhouse gas emissions by supporting emissions reduction activities such as tree planting projects that remove these emissions from the atmosphere.

Renewable energy options are limited in a small, resource-constrained country like Singapore. There is a lack of water resources, our wind speeds and mean tidal range are low, and geothermal energy is not cost-effective. This leaves solar energy as the main source for renewable energy in Singapore. Even then, space constraints limit the number of solar installations that can be directly connected to consumers. As such, the adoption of RECs, particularly solar RECs for those who want to support local renewable energy, has become a more favorable option for businesses in Singapore in pursuit of sustainability goals and climate friendly policies.

To protect the interests of consumers, the Solar Energy Research Institute of Singapore (SERIS) has acted as the Qualified Reporting Entity (QRE) on the TIGRs (Tradable Instrument for Global Renewables) registry in Singapore since 2016. They validate the actual amount of clean energy generated by Singapore-based solar energy projects and then convert this into RECs before they are passed on to customers.

With Apple’s pioneering announcement in 2016 to adopt RECs in Singapore, DBS Bank and Microsoft have also declared their adoption of RECs in 2017 and 2018, respectively. Other businesses are forecasted to jump on the bandwagon as well.

The purchase of RECs brings about many benefits for individuals and companies. They include

How does Geneco support the RECs?

Geneco offers RECs from a variety of sources that advocate effective climate action and the UN Sustainable Development Goals. We can help individuals and companies assert green energy use by procuring, retiring and certifying RECs.

Whether it is local or foreign RECs, it’s your call and we source.

With Geneco’s large pool of RECs suppliers, your purchase requirement would be easily matched. Enjoy cost savings by leaving the time-consuming procurement & administrative process to us.

Purchasing RECs, however, is not equivalent to buying electricity.

Which is why, here at Geneco, we have also bundled the purchase of RECs with our green electricity solutions for your convenience. Start your sustainability journey with us today by choosing Geneco’s Renewable Energy solutions.